The MG Hector SUV comes to you in four variants

India’s first connected midsize SUV, the Hector from Morris Garages, has finally been launched in the country at a fairly attractive price. The MG Hector price in India (introductory) starts at INR  12.18 Lacs and the range-topping ‘Sharp‘ variant could be yours for INR 16.88 Lacs, with a total of 4 variants on offer, viz. Style, Super, Smart and Sharp. Absolute killer package!

The MG Hector SUV is the British carmaker’s first offering for India and is the first mid-size SUV in India to feature the connected car tech. The state of the art 10.4-inch infotainment system that you find on the MG Hector interior features over 50 connected features, all functioning with the help of an embedded SIM connecting the car to the internet.

The car also boasts of a segment-first LED lighting all around. The official MG Hector images show an emotional air of freshness in the overall design of the car. 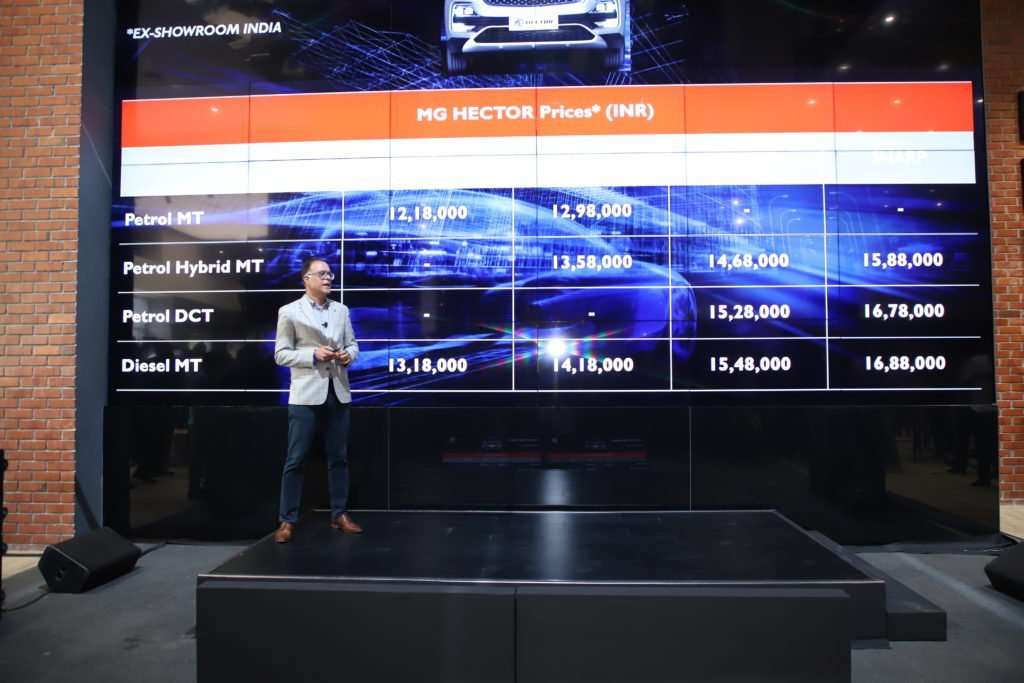 Talking about the MG Hector specs, there is a 170 PS Fiat-sourced 2.0L diesel engine mated to a 6-speed manual box doing the job on one end and a 143 PS 1.5 litre petrol mill mated to either a 6-speed DCT or a 6-speed manual boxes at the other end. The petrol Hector also has a 48V mild hybrid system that is said to pump the net efficiency up by up to 12 per cent.

With the MG Hector specifications being smart and appealing to the young and old alike and the pricing done right, the market is soon to witness some serious new trends for sure. Morris Garages have also announced the official start of operations of 120 of their newly-built, full-fledged touchpoints across 50 cities in the country. The MG Hector booking is already open and you could block yours against a payment of INR 50,000

MG has also announced their plans of pioneering into the ‘car subscription system’, by making the Hector available for short term ownership (say for 3 months or 6 months or the like) right from the day one! The system would be introduced in Delhi, Mumbai and Bangalore initially and later be speard to more cities.

Feeling like to give it a try? Well, we suggest you wait for our detailed MG Hector review piece, that is soon coming your way, before rushing to the nearest MG dealership to get a first-hand taste of the MG Hector car.

A car enthusiast with a fair flair for penning things down as well. Neeraj has the track of having worked with various automobile-oriented publications, both in print and online, and thus has a thorough knowledge of the industry.

The BMW Motorrad Vision DC Roadster Revealed And Looks Stunning As The Stars!

This website uses cookies to improve your experience. We'll assume you're ok with this, but you can opt-out if you wish. Accept Read More